Towards RNA life on Early Earth: From atmospheric HCN to biomolecule production in warm little ponds 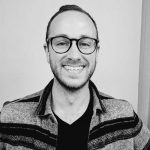 What is the origin of the building blocks of life on early Earth? Is it necessary that they were delivered by meteorites or interplanetary dust? Or was early Earth capable of producing key biomolecules on its own? In the latter case, the process can begin with the production of HCN in the atmosphere, which reacts in aqueous solution to produce several key RNA precursors such as nucleobases, ribose, and 2-aminooxazole (e.g. Yi et al. 2020, Hill & Orgel 2002, Becker et al. 2018, Powner et al. 2009).

In this seminar, I will describe our robust physical and non-equilibrium chemical model of the early Earth atmosphere in which lightning and external UV-driven chemistry produce HCN. The atmosphere is supplied with hydrogen from impact degassing of meteorites, sourced with water evaporated from the oceans, carbon dioxide from volcanoes, and methane from undersea hydrothermal vents. This model allows us to calculate the rain-out of HCN into warm little ponds. We then use a comprehensive sources and sinks numerical model to compute the resulting abundances of nucleobases, ribose, and nucleotide precursors such as 2-aminooxazole resulting from aqueous and UV-driven chemistry within them.

We find that at 4.4 bya (billion years ago), peak adenine concentrations in ponds can be maintained at abundances ~2 orders of magnitude lower than what were delivered by meteorites. The key difference, however, is that atmospheric HCN production leads to a steady source of RNA building blocks in ponds for over 100 million years. Adenine delivered by meteorites is destroyed within months by UV photodissociation, seepage, and hydrolysis, but can provide brief bursts in nucleobase concentrations above the base level from in situ production. The early evolution of the atmosphere is dominated by the decrease of hydrogen due to falling impact rates and atmospheric escape, and the rise of oxygenated species such as OH from H2O photolysis. Our work points to an early origin of RNA on Earth within ~200 Myr of the Moon-forming impact.