Climate and habitability of rocky planets 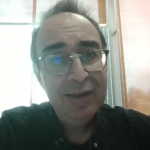 The climate of a planet is of paramount importance for determining the presence of liquid water at its surface, a criterion often used as a proxy for habitability.
For instance, the black-body equilibrium temperature of the Earth given its insolation is about -18C, while the real global annual mean temperature is about 14.5C.
Various parameters influence the climate. Some of them are or will be measurable for exoplanets, e.g. distance from the star and insolation, orbit eccentricity, surface gravity. Others are not: ocean fraction and in general, geography are the best examples.
Numerical models for predicting the climate on a planet are available, and range from very complex one (e.g. Global Circulation Models, GCM) to very simple (0D energy balance models).
GCMs require those informations that are unavailable for exoplanets. We implemented an advanced 1.5D Energy Balance model, called ESTM (Earth-like Surface Temperature Model) that is a 1D latitudinal EBM coupled with computations of radiative-convective column model for vertical heat transport.
ESTM is not as accurate as a GCM, but runs in minutes on a laptop instead of hundred of thousand CPU hours on a supercomputer.
ESTM can thus be used to perform detailed parameter-space exploration. I will present our model and a public database of exoplanet climates obtained varying a number of observable and not-observable parameters.
I will then show an application that links the possible bistability of the climate – namely the existence of a frozen and a warm solution depending on the initial temperature – to the habitability.