‘Life Beyond Us’ interview: Premee Mohamed 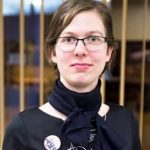 Life Beyond Us is an anthology of astrobiology-themed original SF stories by 22 amazing authors of SF and accompanying essays by 22 scientists. The Kickstarter for the book is running right now, and I’ll be bringing you short interviews with each of the story authors. Today, please welcome Premee Mohamed! 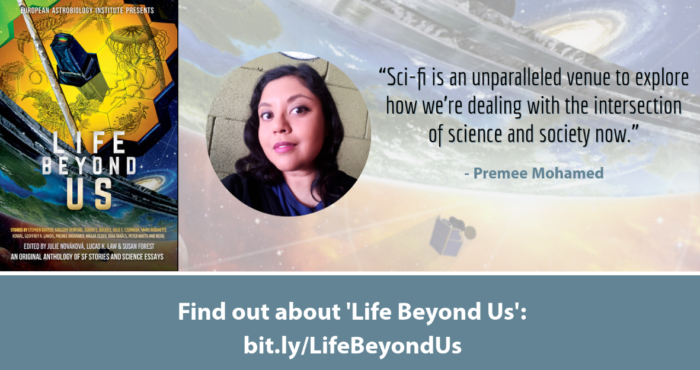 What comes to your mind first when you say “astrobiology”?

When I hear ‘astrobiology’ I’m afraid I think of science fiction before I think of science! I think of worlds where life forms have already been discovered and maybe studied or interacted with, not our current reality of ‘well we’ve received and analyzed signatures of some molecules that are useful for life on Earth that are coming from non-Earth places, but we don’t know what generated them or how.’ I also think of the books in my school library that had these models of life that might exist on other planets: ocean worlds, ice worlds, high-gravity worlds, and so on. I still think of those when I write sci-fi: how does where the action is set affect what happens, what choices are made, and what timelines things can happen on? How can we proceed using Earth life forms as a model, when life on other planets is very likely to not follow an Earth-like biological framework in many (or most!) respects? There’s so much we don’t know.

Can you hint at what’s your story going to be about?

Is ‘hubris’ a long enough answer? I think a good hint would be: When humanity eventually goes into space with the intent to settle in permanent habitats, I’m sure that, despite our greater scientific and technical knowledge, we will make the same mistakes that colonizers have made throughout history: misunderstanding, dismissing, and underestimating the life forms that have evolved before we got there.

Is there any place in the universe you’d love to see – where and why?

I’m actually researching lava lakes right now (of which Earth has disappointingly few) so my first thought was, I’d like to see 55 Cancri e! It’s a little ball of rock so close to its star that it’s entirely melted, and so would be lava on one side and rock on the other, and since it’s carbon-rich, there literally might be a layer of diamond inside it. (I don’t want to land there, I just want to look!) I also thought about some places closer to home – I’d love to see what’s under the clouds in Venus (without dying, I mean) and I want to do research on Europa and Enceladus and Mars. But it’s hard to resist the visual appeal of a flying lava sphere!

Why do you write science fiction?

I think when I set out to write science fiction, I’m trying to stretch out the scope of unintended consequences. All my favourite sci-fi (in which the sci-fi technology or premise forms part of the plot rather than just the setting) is about people creating something that they intend to be beneficial, and having it go wrong. I want to delve into what it means to ‘go wrong’ though. For who, when, how, under what conditions? What are the consequences? Are they evenly distributed? Is it a technology that only negatively affects poor people, or people in a certain area, or of a certain gender, or with children, or with certain jobs or disabilities or other circumstances? If it’s still going ‘right’ for some people, what are the conditions that makes that the case? And best of all, are there ways to correct what’s ‘going wrong’ and make the technology beneficial for everyone? How do people fight back, what do they use, how do they organize? Sci-fi is an unparalleled venue to explore how we’re dealing with the intersection of science and society now, and describe the possibilities for a future that could really exist.

Premee Mohamed is an Indo-Caribbean scientist and speculative fiction author based in Edmonton, Alberta. She is the author of novels Beneath the Rising (2020) and A Broken Darkness (2021), and novellas ‘These Lifeless Things’ (2021), ‘And What Can We Offer You Tonight’ (2021), and ‘The Annual Migration of Clouds’ (2021). Her short fiction has appeared in a variety of venues. Twitter: @premeesaurus