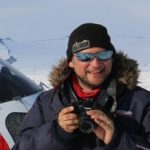 On Earth, life has colonized nearly all continents and oceans from the high altitudes in mountain ranges to the deepest regions of the oceans. Life has also adapted to all climate zones from the polar to the tropic latitudes. But often we forget to take into consideration the subsurface or deep subsurface as potential deep habitats.

This seminar will give insights in the definition and nature of a hidden world, the so-called deep Biosphere which extends from the surface-connected subsurface via the shallow subsurface down to the deep subsurface. The total extension could reach several hundred meters to in maximum several kilometers below the surface and the ocean floor. Examples will be given on discoveries of specific habitable environments in the deep subsurface inhabited by specific extremophiles. Also, the resources will be shown which are available to keep such kind of organisms physiologically active in extremely dark, hot, acidic or alkalic and high-pressure areas of our home planet.

These findings will have implications for the search for life on other planets and moons such as Mars, the Jovian moon Europa or the Saturnian moon Enceladus.