Exploring the Subsurface Environment of Mars and Europa 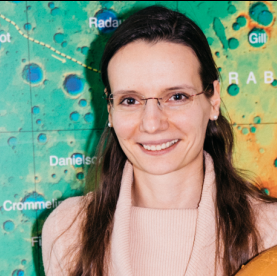 The subsurface environments of Mars and Europa are important targets for planetary exploration due to their high astrobiological potential. On Mars, observations from orbiting spacecrafts and in-situ measurements by rovers and landers show evidence that liquid water was present at the surface and in the subsurface of Mars. The presence of water throughout the early evolution and in transient episodes during later times has important implications for the habitability of the planet. On Jupiter’s moon Europa, subsurface brine pockets or mushy regions may be present. If stable over geological time scales, they may provide niches for the ice shell habitability. Such environments, where liquid water may exist in the subsurface of Mars and Europa, may be located at kilometers depth. Measurements from planetary missions, however, mostly sample the surface and the very shallow subsurface and often provide only indirect constraints for the deep subsurface. Albeit these difficulties, physical processes that are relevant for the interior of planets and for the ice shells of moons in the Outer Solar System can be investigated  using numerical simulations.

In this seminar, I will focus on the dynamics of Mars’ deep interior and of Europa’s ice shell to provide implications for their subsurface, where liquid water may be stable today. Combined with laboratory measurements and data from space missions, thermo-chemical evolution models can help to characterize the subsurface of Mars and Europa and to identify regions of interest for future planetary exploration.